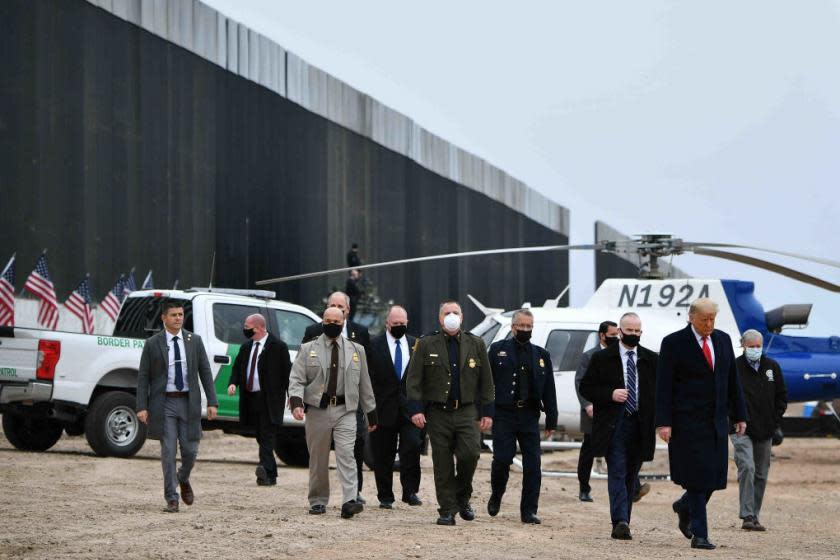 Among the first 17 executive orders President Biden signed Wednesday evening was one hitting “pause” on construction of former President Donald Trump’s border wall. “It shall be the policy of my administration that no more American taxpayer dollars be diverted to construct a border wall,” Biden’s order said. “I am also directing a careful review of all resources appropriated or redirected to construct a southern border wall.”

Biden gave the Pentagon and Homeland Security departments up to a week to stop all border construction, and for the most part, the frantic wall-building Trump had unleashed in his last months in office had stopped by Thursday, The Associated Press reports. The Army Corps of Engineers said Thursday it told its contractors to stop installing any additional barriers and do only what’s “necessary to safely prepare each site for a suspension of work.”

Biden gave his administration 60 days to find and review all current contracts and determine which can be canceled, which must be renegotiated, and whether any of the remaining money can be used on other projects. Trump, as of Jan. 15, had spent $6.1 billion of the $10.8 billion in wall construction it had contracted out, a Senate Democratic aide told AP. Overall, the Trump administration had secured $16.45 billion for the wall, including $5.8 billion appropriated by Congress and the rest seized from the Treasury and Defense departments. Biden is targeting that latter pot of money.

Trump says he built 450 miles of his wall, though almost all of that was replacement for other barriers. His administration signed contracts for constructing 664 miles, the Senate aide told AP. “Trump said the border wall would be ‘virtually impenetrable’ and paid for by Mexico, which never happened,” AP notes. “While the wall is much more formidable than the barriers it replaced, it isn’t uncommon for smugglers to guide people over or through it. Portions can be sawed with power tools sold at home improvement stores.”

More stories from theweek.com
5 scathingly funny cartoons about Biden’s COVID-19 push
‘No way’ McConnell has had a post-Trump ‘epiphany,’ political scientist says
In candid interview, Birx says she knew working with Trump White House would be the end of her federal career