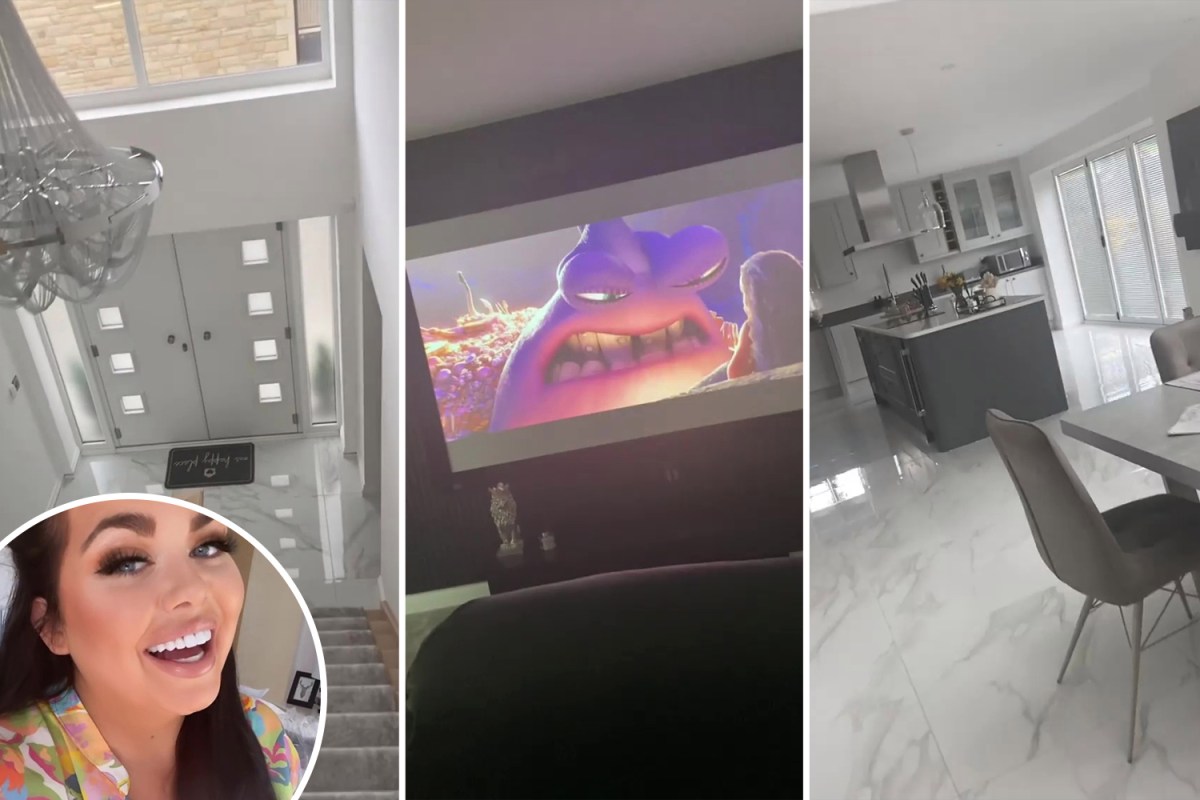 SCARLETT Moffat has given fans a tour of her glamorous new home after months of renovation alongside her boyfriend Scott Dobinson.

The 30-year-old took to Instagram to show off the huge kitchen, sweeping carpeted hallway and an incredible cinema and games room.

After completing the home renovations this week, the TV personality filmed as she walked round her home and pointed out her favourite details.

She told her social media following that she’d taken plenty of inspiration from pal and home-renovation queen Stacey Solomon.

Starting the tour at the front door, Scarlett began by announcing that she and boyfriend Scott, 36, could finally call the property “home”.

“I’ve always wanted to do this, I’m Scarlett Moffatt and this is my crib,” the Gogglebox star joked as she walked around the grand entrance area.

The hallway featured white and grey marble tiles, a wooden staircase with plush grey carpet and a glittering silver chandelier.

Large wooden double doors to the right of the hallway take guests into a games and cinema room for the couple to entertain guests.

The star filmed the grey pool table, a pull-down cinema screen and plenty of comfortable chairs, as well as a small stage.

In the corner of the room Scarlett pointed out a huge double fridge with built-in drinks dispenser to refuel without walking to the kitchen.

The Channel 4 star then gave a glimpse of her bathroom, complete with sensor-flush on the toilet as an ideal Covid-friendly addition.

Scarlett then moved onto her sleek kitchen and spacious dining room, which had shiny white floors, white cupboards and large windows.

A monochrome grey theme tied the two spaces together, as the grey kitchen island matched with the dining table and chairs.

The table was backlit by a fireplace in the wall, decorated with sand-coloured stones, which separated it from the snug living room.

Behind the stone feature wall, a large green sofa had been carefully placed in front of the television and a glass-topped coffee table.

The TV star made sure to point out the panelling on her walls had been added as an “imitation”, inspired by friend Stacey, 31.

“Stacey Solomon is my friend, I copied this from her, she won’t mind,” she told her followers of the design.

Scarlett said she took another leaf out of the Loose Women panellists book in creating a utility room, opting from a “Mrs Hinch grey” rather than Stacey’s favourite pink.

Accompanied by pet dog Bonnie, Scarlett then filmed the upstairs of the home on the tour, sharing some of the bedrooms and bathrooms.

The master suite was focused around a huge bed, including a mirrored dressing table and a special dog bed for her pampered pooch.

She also showed off her en-suite bathroom, with a bargain £6.99 mirror, and a private dressing room filled with her clothes.

The upstairs also had a bedroom for Scarlett’s little sister for when she comes to stay the night – of course when Covid rules allow.

Last month, Scarlett explained she had decided on getting a cinema, wine cellar and stage built in her home.

Speaking on the podcast All Round Mine, she said building her own home meant she could tailor it to what she likes.

“Underneath the stairs is getting made into a wine cellar,” she explained. “We’re having glass doors made and I mean, it makes me sound fancy but when I buy wine I literally get the highest percentage at the lowest price. I just really like drinking wine to be honest.

“To the right is some more double doors and this is our cinema room. This is carpeted and has wood veneer – black matt wood veneer on the walls – so it’s very soundproof.

“We actually commend the people at Carpetright because we got a stage built and they managed to carpet around the stage so that it looks very cinema-like.

“So it’s like acoustic wood, so it helps the sound quality so that it doesn’t bounce off the wall. Because we haven’t got a lot of furniture in that room that was important so that it didn’t sound echoey.’

She explained of the stage: “I feel like to Scott’s annoyance I will be doing one woman shows for him on that stage. Not in a sexy way either!

“We’ve got a pool table in here, a liberty games one, it’s a six foot one so big enough for me. Size doesn’t always matter.”

The Gogglebox star purchased her home last year after selling her previous abode in County Durham for £395,000, a week after putting it on the market.

“Our master bedroom we’ve gone for panelling, a bit Edwardian style,” she continued to detail the things they had renovated in the house.

“We’ve got like a navy ornate bed being made locally by a wonderful guy who owns Hugo and sons. You lift it up and we can fit all of our sheets and stuff under there.”

It hasn’t all been stress free for the star, who admitted she was still struggling to believe the dream home is hers.

She went on: “I have had a lot of tears over this. Like happy tears. Can’t wait to stick some flip flops on and pretend I’m walking to the hotel reception (love the sound of flip flops on tiles ha) need some advice on what’s the best way to clean them?

“I can’t believe I’m 30 and because of the wonderful people that support us I’m able to like live in my dream house. I can’t believe this is mine and Scott’s forever home.

“It’s quite stressful I’m not gonna lie, it’s stressful in a good way. There’s so much stuff to think about when you’re building a house.”

Scarlett shares the home with police constable Scott, who the star announced she had split from before getting back together 24 hours later.

Everything to know about Sydney Raines

Kelly Clarkson once POOPED in trash can midway through live performance

The star said moving house had caused a few tiffs between the couple after having a “plain sailing relationship” up until that point.

Scarlett thanked her fans for asking if she was okay following the break, taking to her Instagram stories to assure it was “fine”.

“We are okay, we’re fine,” she said. “We’ve been together for two and a bit years and it’s been very plain sailing.

“We haven’t had anything stressful happen. But – moving house is stressful. But we are together – we’re fine!”