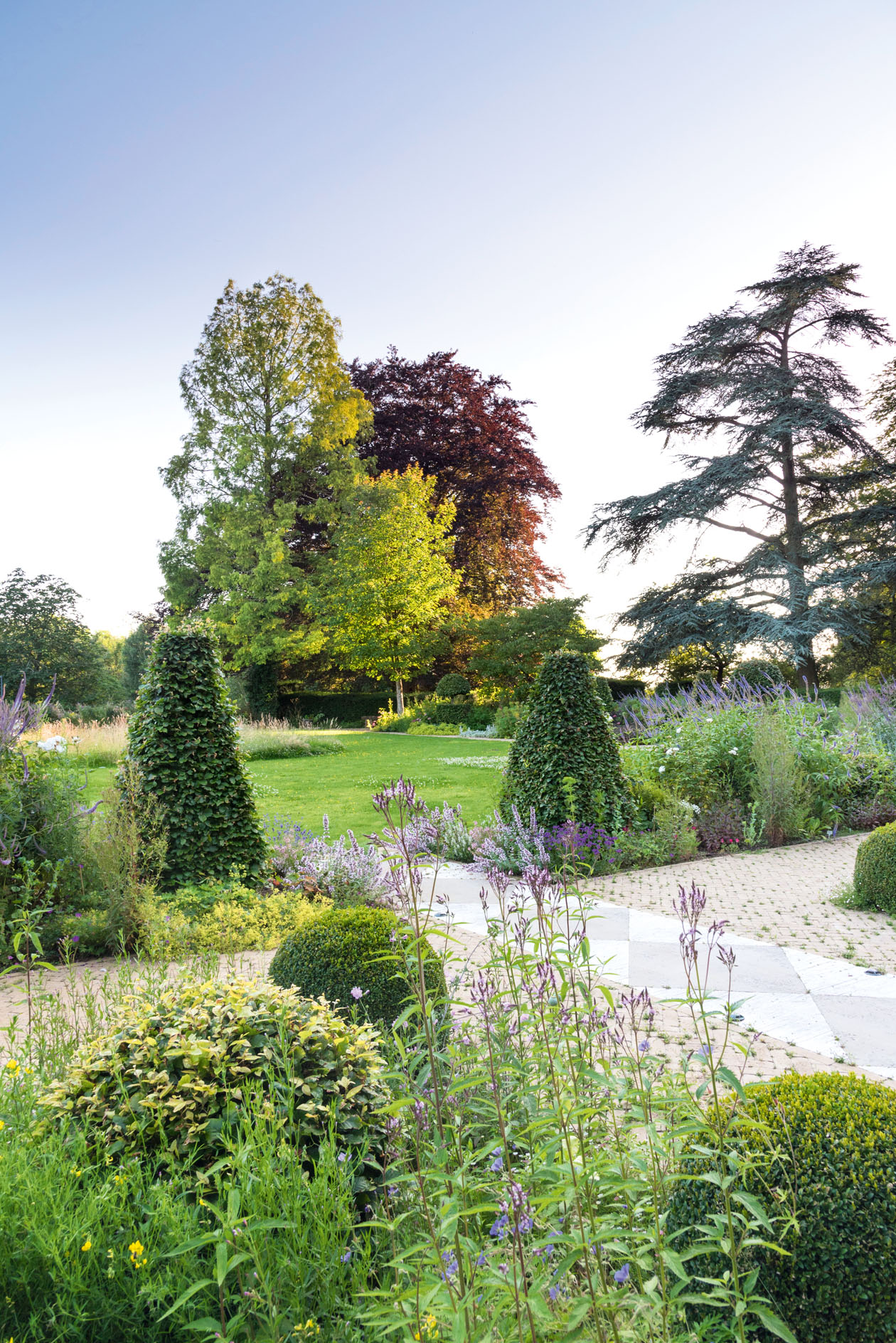 Retaining the Arts-and-Crafts elements of a 1920s garden, the owners have added a sympathetic new terrace, as well as returning the surrounding fields to meadow, finds George Plumptre. Photos by Mimi Connolly.

Recently, there have been quite fanciful ideas circulating about rewilding. If you believe some people, in the not-too-distant future, tracts of the British countryside could look like a mixture of the western US and the African savannah, with wolves, lynx and bison emerging from dense forests, rivers dammed into lakes by families of beavers and swathes of grassland and scrub bush populated with bustards, cranes and wild boar.

At Ready Token House in Gloucestershire, Mark and Tabitha Mayall have introduced an altogether gentler style of rewilding, creating the perfect habitat for a host of native wildflowers and a range of small creatures — many endangered — in particular butterflies.

When they bought the property in 2015, to one side of the house and garden was some 60 acres of sheep pasture. They negotiated with the tenant farmer to stop the sheep grazing and returned the whole area to permanent meadow, where a rich array of wildflowers has rapidly established itself.

Ready Token’s elevated position is confirmed by the spectacular views to the southeast, which, on a clear day, reveal White Horse Hill 30 miles away. It also means that the not-too-fertile soil over underlying Cotswold Jurassic limestone is an ideal base for wildflower meadows, naturally limiting grass density and allowing for a wide variety of both grasses and wildflowers to get established and thrive. The hands-off management regime of recent years has brought spectacular results, with both the variety of plants and insects, and the quantities of individual ones increasing dramatically.

The junction of the terrace and the lawn, with beech pyramids, Veronicastrum virginicum and Verbena hastata f. rosea ‘Pink Spires’. The gardens of Ready Token House, Gloucestershire. ©Mimi Connolly

We will return to the meadows, but, first, we should enjoy the garden immediately around the house, where Mr and Mrs Mayall have transformed the remnants of an Arts-and-Crafts garden. This dates from the 1920s, when the original 17th-century house was renovated and extended by the distinguished Cotswold architect Norman Jewson, best known for his work at Owlpen Manor in the same county. Jewson is recorded as working at Ready Token in 1929, giving the house its elegant, friendly current appearance, with a long central garden front protected by asymmetrical wings both set at an angle.

The most obvious survivor from the Jewson garden is a formal rectangular pool hidden away beneath now mature trees. Two low terraces with flights of stone steps at either end descend to a rectangular pool or rill with stone surrounds. It is evocative of the period, its appearance made all the more so by an atmospheric covering of perennials and ferns that decorate the low terraces.

The main area in front of the house has been transformed with a design by Italian garden designer Lorenzo Volpini, whom the Mayalls commissioned a year after their arrival. Their distinguished Cirencester-based architect, Yiangou, recommended Signor Volpini, who was involved in setting up The Cotswold Gardening School, where he still teaches, as well as running his own practice LSV Gardens. 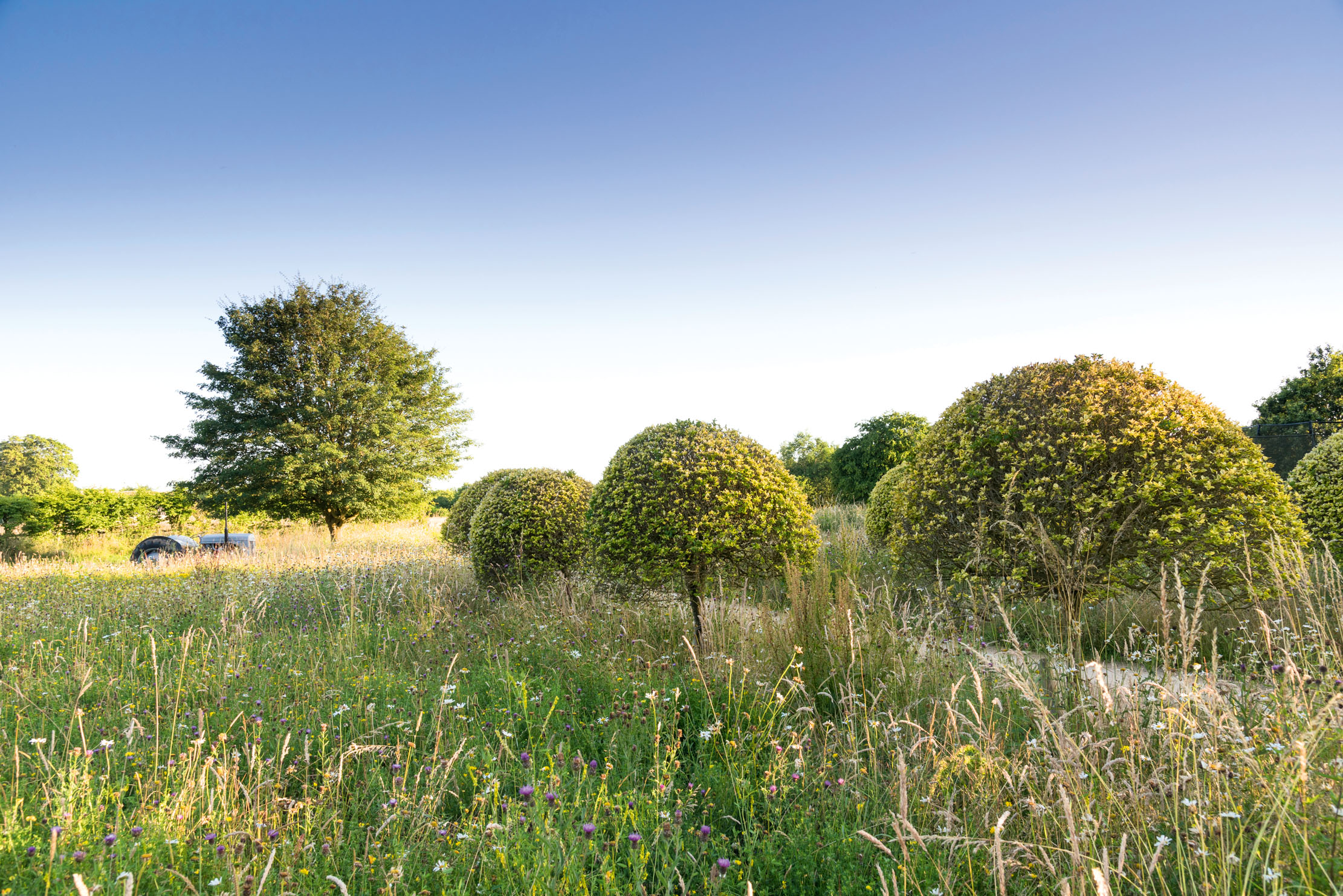 The wildflower meadows were created from sheep pasture and privet lollipops provide definition at the end of the drive. The gardens of Ready Token House, Gloucestershire. ©Mimi Connolly

Planting began in 2016 and was completed the following year; five seasons on, Signor Volpini’s work is an unqualified success. It is gently formal, subtly chic and sympathetic to the house and the landscape surroundings. A broad terrace of herringbone bricks and a formal pattern of flowerbeds with clipped box domes on corners now fuses house and garden in perfect scale, with the sense of union further enhanced by the enormous wisteria that extends along most of the main building and rambling roses on the wings, including the wonderful magenta-purple flowered Rosa ‘Veilchenblau’.

From the kitchen door, a striking path of large diagonal stones leads across the terrace and would be as appropriate in Italy’s Marche or Umbria as the Cotswolds. Beyond the terrace, Signor Volpini’s broad expanse of lawn, the same width as the house’s central block, now has a nod to the Mayalls’ meadow tendencies: a circle of grass that is left unmown.

On either side of the lawn, gravel paths divide the grass from small symmetrical beds, where yew and box topiary shapes frame a sparking seasonal succession of perennials and grasses. High summer brings many different forms of veronicastrum, sanguisorba, salvia and geranium, as well as the coppery-toned Digitalis ferruginea and airy Gillenia trifoliata. These are followed by a variety of echinaceas, monardas and asters, as well as two of the most shapely grasses, Calimagrostis brachytricha and Stipa gigantea.

With its embracing shelter of mature green and copper beech trees on the far side of the house and along the garden’s west boundary, the whole ensemble of house and garden is reassuringly domestic and yet characterful, with some bold statements. The main terrace invites relaxation and entertainment; the planting in the various beds and borders is both exuberant and harmonious. From all areas, one is conscious of the landscape beyond and easily drawn along the mown paths that lead through the meadows. 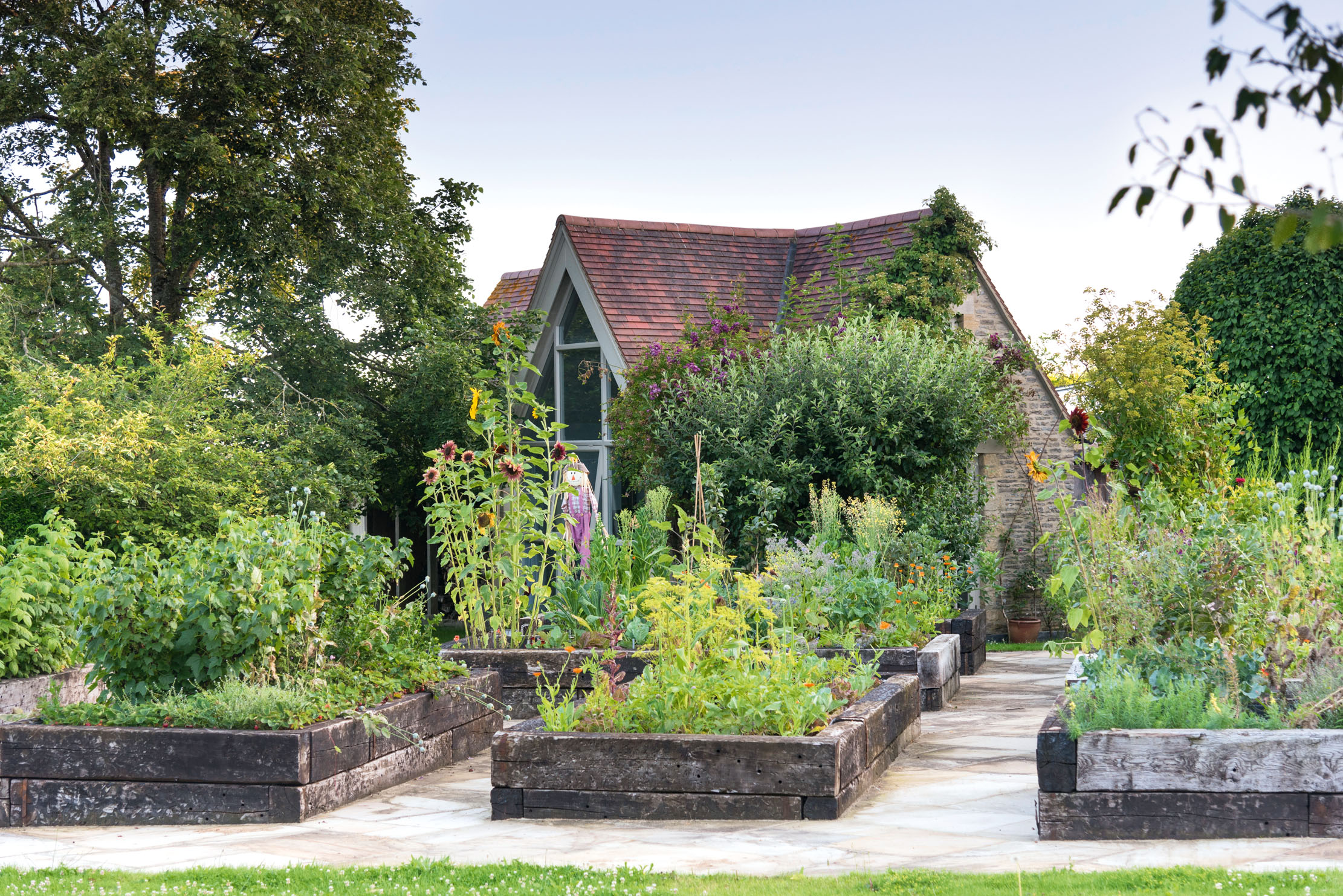 The beautifully managed Kitchen Garden at Ready Token features productive raised planting beds made from wooden sleepers set in smart stone paving. This is where Tabitha Mayall grows myriad vegetables and cut flowers for use within the house. The gardens of Ready Token House, Gloucestershire. ©Mimi Connolly

Some are edged and protected by hedgerows, where the old destructive regime of regular cutting with a flail has been stopped, allowing mixed native species (blackthorn, field maple, wayfaring tree, rowan, crab apple) to thrive. On the far boundaries, some of the meadows are bordered by sheltering woodland.

Close to the house, a large, newly dug pond will soon be bordered by a mixture of marginal plants and help to further widen the biodiversity that has been achieved at Ready Token. The balanced relationship between the areas around the house, including the immaculate vegetable garden to one side of the entrance front, with a pattern of wooden raised beds set in smart stone paving, and the wider meadow landscape, has been achieved effortlessly and in a remarkably short time. Mr and Mrs Mayall are confidently committed and, in many ways, gardeners who herald an exciting and conscientious future.

The meadows at Ready Token

Wandering through the meadows at Ready Token on a hot summer’s day, when drifts of common bentgrass (Agrostis capillaris) produce swathes of a light purple haze, with a constant array of different butterflies shimmering on all sides, is a joy.

The many butterflies include rarities, such as the brown argus and small blue. Among the wildflowers are common favourites, such as ox-eye daisies and red clover, which are now producing wide drifts every summer, and others that were once meadow staples, including field scabious, bird’s-foot trefoil and the deep-pink corncockle. Most choice are the bee and pyramidal orchids, the latter of which have naturalised quite spectacularly, producing a swathe of more than 100 plants along the edge of one meadow. 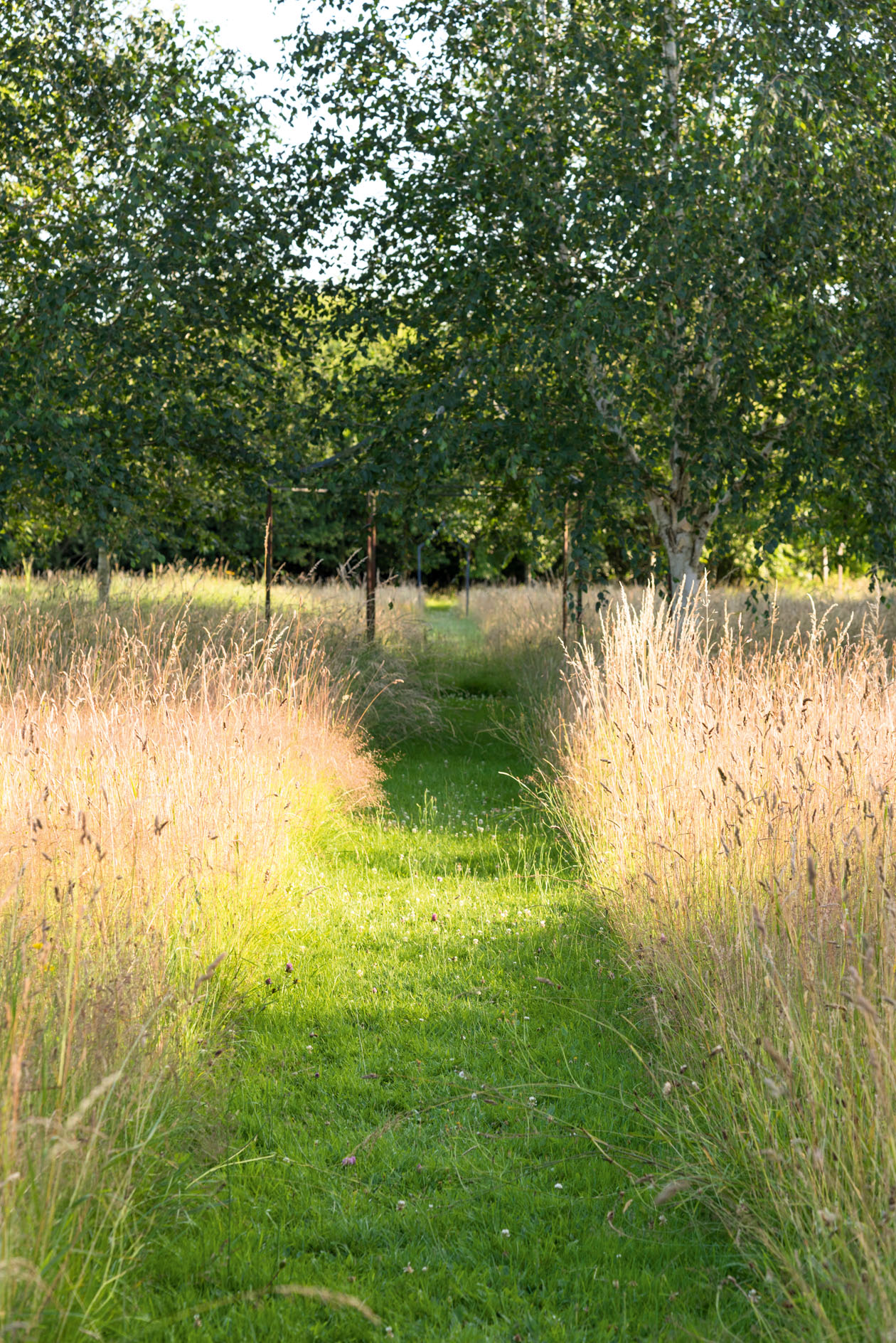 Mown grass paths cross the meadow, which is now home to bee and pyramidal orchids. The trees are Betula pendula. The gardens of Ready Token House, Gloucestershire. ©Mimi Connolly

The rewilding at Ready Token does not involve any large mammals. Its biggest successes are probably barn owls, but, mostly, it has been about small wildflowers, butterflies and moths, birds and invertebrates. Their arrival and subsequent thriving expansion in a few years is powerful testament to what can be achieved by returning appropriate land to gently managed Nature. The practice is epitom-ised by the appearance of the parrot wax-cap mushroom (Gliophorus psittacinus), which will not grow in ground that has been artificially fertilised.

George Plumptre is chief executive of the National Gardens Scheme

The grey border and loft at Munstead Wood. Photographed circa 1912. Originally thought to have been taken by Gertrude Jeykll, but later attributed to Herbert Cowley – then Country Life gardens editor.
Credit: Herbert Cowley / Country Life

George Plumptre is won over by a sympathetic and highly individual design that gradually reveals its string of secrets.

After 40 years, George Plumptre finally realises his dream and sees for himself Vignola’s masterpiece: the garden at Villa Lante.

Nymans Garden in West Sussex is one of Britain’s great horticultural wonders, and with its relatively-new head gardener – only