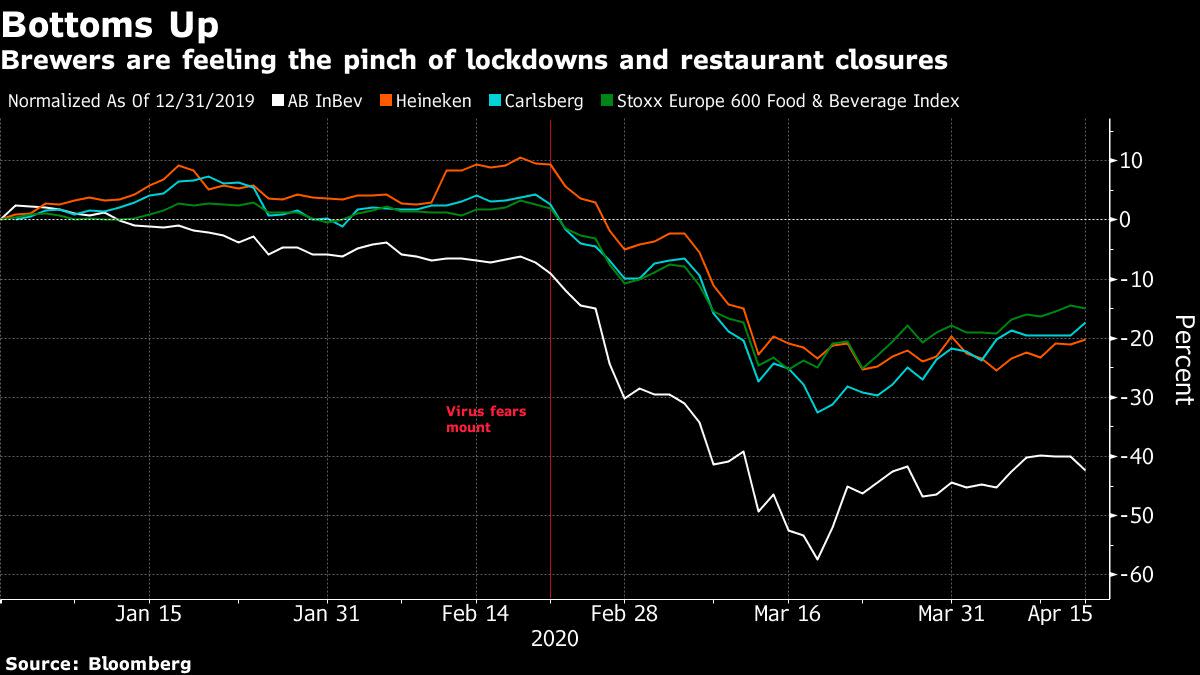 (Bloomberg) — Consumer-goods companies from brewers to paint-makers sounded notes of caution on spending as the fallout in confidence from the coronavirus pandemic spreads even as lockdowns are lifted.

Heineken NV canceled its interim dividend and said its board will take a pay cut to mitigate the impact, while Kering said it doesn’t see a recovery in the U.S. or Europe before at least June or July after sales at its flagship brand Gucci tumbled. The shares fell nearly 7%. Akzo Nobel NV’s stock rose after earnings topped expectations, but the company said shoppers will need to “have money in their pocket” before shelling out for decorative paints.

In one of the only industries cushioned from the virus, Roche Holding AG advanced after the drugmaker said it still sees a small profit gain this year as demand for its medicines holds up and the company works on developing tests for Covid-19.

Here’s the top virus-related earnings news for today by sector.

French luxury conglomerate Kering gave a cautious assessment of the rebound in sales in China following the “deep impact” from the pandemic for its flagship Gucci brand. First-quarter sales missed expectations, with revenue at Gucci slumping 23% on an organic basis. The performance at Gucci looks, “at first sight, out of line” with the 10% sales drop for rival LVMH’s Fashion and Leather Goods division, according to Bernstein. It suggests a “hint of brand-specific slowdown,” given that all other Kering labels did better, in particular Bottega Veneta, the broker said. Bank of America cut its rating on Kering shares by two notches after a “sizeable” miss on Gucci sales. Kering shares sank as much as 6.9%.Boohoo Group Plc said it’s not appropriate to provide guidance for this financial year given the coronavirus pandemic. The online fashion retailer struck a cautious tone even though trading has begun to recover since March and sales in April are up year-on-year. Co-founder Carol Kane said orders rose in April as shoppers switched from buying outfits for going out to snapping up pajamas, hoodies, palazzo trousers, crop tops and other comfortable clothing for working from home. In international markets, particularly those with warmer temperatures, shoppers have been buying swimwear. Jefferies sees Boohoo capturing and retaining new customers, given shoppers are “spending considerably more time on social media.” Shares bounced as much as 7.7%.

Dutch brewer Heineken said weakness in emerging-market currencies could exacerbate the impact of lower beer consumption as the industry takes a heavy hit from the pandemic. Beer volumes dropped 14% on an organic basis in March and by 2.1% for the first three months, though the group said the second quarter will be worse. Analysts said March was worse than expected and the update indicates consensus estimates may need to come down across the beverages sector. Shares were little changed.Tonics maker Fevertree Drinks Plc said the coronavirus outbreak will have a material impact on trading but that it’s too early to quantify the full effect on the remainder of this year. It’s still committed to paying a 2019 final dividend. The maker of high-end drink mixers has suffered from the closure of bars and restaurants, though it’s benefited from customers stockpiling products amid lockdown measures. Analysts said the update was confident.

Drugmaker Roche reported first-quarter sales ahead of expectations, confirmed its 2020 outlook and said it expects to further raise its dividend this year. Bloomberg Intelligence said the results demonstrate Roche’s resilience and Goldman Sachs said the update is “comforting.” The shares rose as much as 2.3%.Medical equipment supplier Getinge AB reported organic revenue growth of 3.8% in the first quarter, while adjusted operating profit more than doubled from a year earlier. The Swedish company said it continues to see strong demand for its ventilators and oxygenation machines, since demand is outstripping supply during the Covid-19 pandemic. The stock fell 2.2%. Pareto Securities said Getinge’s operational leverage is impressive and it should see plenty of upside in the next 6-18 months.French biotech Ipsen SA posted an 8.7% increase in sales in the first quarter as stockpiling by some European countries of its cancer drugs helped offset lower demand for its consumer health products in China. The company said it has adequate inventory and no supply chain issues to continue serving patients and expects the situation in China to improve in the second quarter. However, delayed diagnoses and lower new patient increases may impact oncology drug sales. The shares rose as much as 16%.

Swedish telecom-equipment group Ericsson AB said its second quarter is likely to be a “tad softer” than normal but maintained its targets. It said the market for network equipment may shrink as mobile-phone operators postpone upgrades to the latest 5G technology to weather the economic hit from the coronavirus. Analysts hailed strong margins at the company, which offset a more cautious outlook. Shares rose as much as 7.1%.Chipmaker STMicroelectronics NV said its second-quarter revenue will decline compared to the first three months. It said it sees demand for automotive chips taking a hit in the second quarter, which will lead to lower revenues of about $2 billion. The shares rose by as much as 8.3%. Analysts said the update indicates “significant weakness” in the firm’s auto unit.One theme emerging in trading updates this morning is the worry that factories won’t get the components they need due to national lockdowns. STMicro said government regulations are creating logistical challenges and some plants will run at reduced capacity in the second quarter. Swedish phone carrier Telia Co. AB expects a component shortage to affect industry suppliers Ericsson and Samsung. Ericsson CEO Borje Ekholm warned that “the longer the lockdown in many countries continue, the more disruptions we will likely see for example of our supply chains.”European tech stocks outperformed the Stoxx 600 on Wednesday, helped by a good reception to results from the above and from the likes of ASM International NV and Atos SE.

With home improvement shops shut due to the lockdown, Akzo Nobel saw the virus hit demand for its household paint brands, including Dulux sold in China and the U.K. The outbreak clipped sales by about 8%, with the biggest impact in Asia. Headwinds will be more severe elsewhere in the world in the second quarter, the company said. “Consumers will need to have money in their pocket before they spend money on decorative painting,” Chief Executive Officer Thierry Vanlancker said on a call. Analysts said the results beat expectations, boosted by cost savings and a relatively limited impact from the virus. The stock jumped as much as 9.1%.Swiss elevator maker Schindler Holding AG said its earnings and revenue in the first three months declined, with the shutdowns during the pandemic leading to temporary plant closures and making it difficult to conclude contracts on existing projects. Analysts said the first-quarter topped expectations for Schindler but the second quarter is likely to be weaker. Shares fell 0.6%.Finnish peer Kone Oyj, reporting later in the morning, jumped after keeping its 2020 outlook unchanged. Its shares rose as much as 9.4%, though the group said the worst is still ahead and it will face higher costs as it works to mitigate the impact the virus is having on its supply chain and deliveries. Morgan Stanley said the first-quarter results were “impressive.”

CRH Plc says it’s too soon to quantify the impact of the coronavirus on the rest of the year. In the meantime, the Irish buildings materials company said it’s suspending all non-essential and discretionary spending, laying off some staff on a temporary basis and introducing 25% salary cuts for all leadership teams and board members. It’s also postponing its share buyback program, but keeping its dividend. The shares rose 7.7% in Dublin. CEO Albert Manifold expects CRH’s focus on the U.S. and Europe to be an advantage as the construction industry is getting government support in both regions.France’s Eiffage SA said its revenue excluding construction declined by 5.8% in the first quarter, with traffic on its toll road concessions falling as governments in France and the rest of Europe put restrictions in place.

Svenska Handelsbanken AB said its profit for the first three months slipped 17% as credit losses swelled. Net credit losses rose by 87% in the first quarter. Sweden has taken a controversial approach to the pandemic, with less strict measures than much of Europe, but there has still been an impact on businesses as emergency loan requests have soared. The shares were up as much as 5.1%. Jefferies said the impairments were lower than anticipated.Italian lender UniCredit SpA said it will take additional loan loss provisions totalling 900 million euros in the first quarter based on its projections for GDP to decline 13% for the euro area in 2020. Jefferies said the move by UniCredit will put pressure on peers to do the same.Specialist insurer Beazley Plc was the laggard on the Stoxx 600 Insurance index, falling as much as 5.8% after its guidance for Covid-19 costs came in higher than RBC analysts had expected.

U.K. student accommodation landlord Unite Group Plc expects its income for the 2019/20 academic year will be 16-20% lower. The group is taking a hit from lower levels of demand from students coming from overseas owing to pandemic travel restrictions. Liberum said the company should have enough financial headroom even if the virus disrupts the 20/21 academic year too. The shares bounced as much as 5.7%.Belgian health-care property owner Aedifica SA said it sees no material change to its earnings outlook for the year and has been receiving rental payments from tenants in line with normal patterns. It said all its residential care facilities remain operational. KBC said the key surprise was the company securing an extension on the maturity of its bridge loans, which “seriously improves” the company’s liquidity profile.

Dutch staffing firm Randstad NV said its first-quarter organic revenue dropped by 7.4% and it expects the current quarter to be more challenging with limited visibility on its outlook. RBC said the performance in March was not as bad as expected. The shares rose 7% at the open but reversed later, falling 0.9%.

Wind turbine maker Siemens Gamesa Renewable Energy SA scrapped its guidance, saying it has seen disruptions to its supply chain and manufacturing operations and adding its offshore and services unit could see some challenges in coming months. Shares fell 1%.

Chilean copper miner Antofagasta Plc said its 2020 copper production is likely to be at the low end of expectations. But shares rose as much as 4.7% as Citigroup analysts said the update looked strong overall, with better grades and improved guidance on costs.

Current European valuations look bullish but actually just reflect laziness, because half of analysts have yet to downgrade their estimates, Sanford C. Bernstein strategists wrote in a note.European stock investors should stick to quality stocks over value even if there is a rebound in economic activity as any recovery will be uneven, Barclays Plc strategists say in a note.U.S. stocks are likely to hit new lows if current patterns in volatility hold, with the current bear-market rally most closely resembling what happened in 2008, according to Bank of America Corp. strategists.Stock markets are finally beginning to feel the fear that has been present in bonds and credit, with the chaos in oil markets this week proving too much for investors to ignore.Corporate earnings expectations for the U.S. are collapsing and while markets have so far shrugged this off, that may not continue to be the case, according to UBS Group AG strategists.The current downdraft in equity markets should continue despite some traditional buy indicators signaling that investors should dive back in, Citigroup Inc. strategists said in a note.

For more articles like this, please visit us at bloomberg.com

Subscribe now to stay ahead with the most trusted business news source.