It’s a bit mix and match, but every piece has a story,” says Cordelia de Castellane of the eclectic assemblage of treasures inside her enchanting country house about an hour north of Paris. Although she hails from an aristocratic family that counts numerous statesmen and aesthetes in recent generations, the artistic director of Dior Maison and Baby Dior is anything but stuffy and old-fashioned. So it comes as no surprise to find that her personal retreat, festooned with climbing pink roses and chock-full of family heirlooms and flea-market finds, is a dreamy, effortlessly chic getaway.

A Braquenié print envelops the boudoir. Cordelia de Castellane often draws at a desk that belonged to her grandmother.

De Castellane in an efflorescent alcove next to her boudoir.

De Castellane has been steeped in the fashion world since youth. She went to work at 16, cutting her teeth with fashion legends Emanuel Ungaro and Giambattista Valli. “I started out as an intern, and I did everything,” she recalls. “I picked up the needles and learned it all—from working with the press to doing fittings.” In 2012, after she had helmed her own children’s clothing line for 10 years, Dior book profits enlisted her to design its collection of kids’ fashion. Five years later, they tapped her
to become the first artistic director for Dior Maison. Long available only at the Dior flagship on the Avenue Montaigne in Paris, the home collection has been a favorite of design cognoscenti for decades. So it was exciting news for U.S. fans when the collection became available here, launching last December at Dior’s Miami Design District location. Plans are now under way to open corners in Houston, Washington, D.C., New York City, Beverly Hills, and Vancouver stores.

In the main salon, a blend of vintage furnishings, including a vibrant rug from the Paris flea market, mix with a Bespoke sofa. Moroccan Stools.

Wellies lined up in the mudroom.

Situated on about five acres, the bijou estate, parts of which date back to the 15th century, was a place of refuge for de Castellane and her husband long before they bought it. For years, the couple rented a small cottage on the grounds from the family friends who owned the property. “My husband plays golf and I ride, so this is the perfect place for both of us,” de Castellane says. Slowly the space bioptimizers coupon code became more than just a landing pad for weekend getaways. The owners were often abroad, so she began taking care of the garden with their blessing. De Castellane’s father loved to visit and, recognizing its bucolic appeal, encouraged his daughter to try to buy
the property.

The kitchen’s cozy eating nook is layered with Simrane fabrics. Chairs from Asiatides.

De Castellane and her son Vadim in the kitchen. Backsplash of vintage tile.

“And then, as things would have it, he passed away, and one week after his death, our friends told me they were going to sell,” de Castellane explains. “I saw this as a sign that this was the house for me.”

Constructed over several centuries, the three-story main house features six bedrooms and six baths. Upon being handed the keys, de Castellane launched a major renovation. With four children, she knew that the home’s functional spaces needed practical changes. “One of the salons was the dining room, and I hate dining rooms! I must have spent too much time at the table growing up,” laments de Castellane. “We eat in the kitchen, which is not very French, but I love to cook and have everyone together.” For more formal occasions, like Christmas, a salon can be rearranged so that 18 can sit around a table brought in for the festivities. The dwelling she used to rent has been revamped into an inviting three-bedroom house whose rooms are swathed in toile de Jouy.

De Castellane counts her mother and Emanuel Ungaro’s wife, Laura, as her decorating influences, namely for their fearless pattern-mixing. “They told me to always do things totally and not halfway,” she says. Indeed, the spaces are composed with a well-chosen mix of fabrics and papers. Much of the furniture was plucked out of her family’s many other homes. Engravings from the château of famed architect Emilio Terry—her grand-uncle—hang throughout the house.

The main salon, a Moroccan bench stands in front of an antique Italian secretary.

In de Castellane’s bedroom, the 19th-century Italian bed is dressed in a blue-and-white block-printed cover from Simrane.

Still, de Castellane points out that there’s more work to be done. A tireless improver, she recently renovated the third floor and converted a room under the eaves into a media room and library. Its walls have been painted strawberry, with the sofas covered in a jumble of patchwork fabrics. She also has her eye on the “donkey shed,” an unused structure on the property that she is turning into a cozy spot for afternoon tea.

With work and school centered in Paris, the family uses this place on weekends year-round and spends the entire month of July there. The vivacious chatelaine delights in opening it up for guests. “Sometimes friends come out on Sunday for the day with their kids,” she says. “They play tennis, and there’s a lake nearby for swimming. It’s always full.” Like its mistress, this family-friendly place is brimming with life. 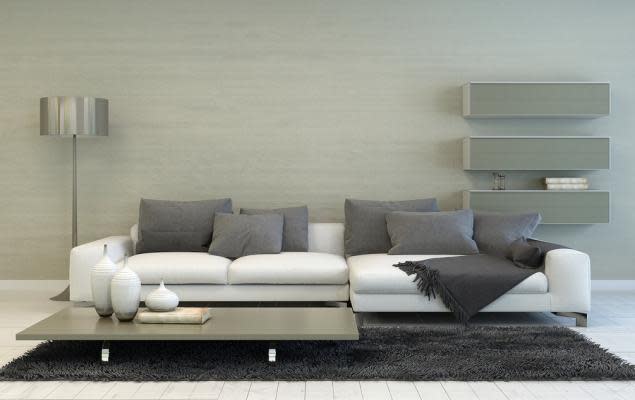