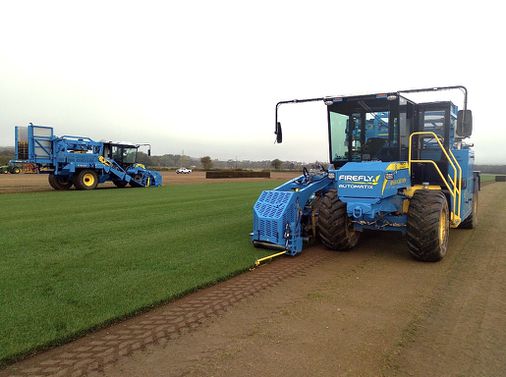 But since the beginning of the pandemic, the state’s oldest sod farm has been busy helping homeowners tidy up their yards during the lingering COVID-19 pandemic.

Brock Bouchard, vice president of Kingston Turf Farms, said sales have jumped 15-20 percent over the last year, with no sales effort. He attributed the uptick to more people staying at home during the pandemic and working on do-it-yourself home improvement projects.

“We have been in business 54 years,” Bouchard said. “To have business expand or increase in sales with no sales effort — no paid salesman on the road, word of mouth and internet and phone business — for a business of that age to increase in this economy, is a pretty strong statement.”

The number of people trying to improve the value of their home has steadily increased for about a decade, according to Abbe Will, a senior research associate and associate project director for the Remodeling Futures Program at the Joint Center for Harvard Studies at Harvard University.

Will said the American Housing Survey by the US Census Bureau, a national study that provides current information on the size, composition, and quality of the nation’s housing, and measures changing in our housing stock as it ages, found Americans are spending more to improve the value of their homes. That does not include maintenance repairs that maintain the value of a home.

The AHS survey is conducted in odd-numbered years. The most recent study was completed in 2021 and will be released this summer.

The survey will have new information about the quality and cost of housing in the US and major metropolitan areas, the physical condition of homes and neighborhoods, the costs of financing and maintaining homes, and the characteristics of people who live in these homes.

The information is used by planners, policy makers, and community stakeholders to assess the housing needs of communities and the country.

Will said home improvements like driveways, walkways, fencing, landscaping, sheds, tools and recreational structures accounted for 10 percent of US spending.

A pre-pandemic survey in 2019 showed Americans hit a new high with about 15 percent of spending for home improvements.

The trend is expected to continue with the 2021 survey.

“We think based on other data sources, the impact of homeowners spending more time at home the last few years and utilizing every inch of their home, entertaining more safely outdoors, but even just wanting to make every part of their home a usable space, we think the pandemic has boosted property improvements but we don’t have the hard data on that yet,” Will said.

She predicts we will see big increases in the retail sales of building materials, such as lumber and wood alternatives for porches and decks, which are in short supply because of an unprecedented supply shortage across multiple industries.

In 2019, US sales totaled about $7 billion for driveways and walkways, $5.8 billion on fencing and walls, $7 billion on sheds and detached garages or other buildings not attached to homes, and almost $8 billion on landscaping, Will said.

The estimated growth for remodeling in 2020 was about 3 percent of the overall economy, and it is expected to grow to 9 percent in 2021, despite a shrinking economy, she said.

“Overall, historically, home improvement spending has grown about 5 percent over the last couple of decades going back to 1985,” Will said. “We do see booms and busts. The last big boom and bust was the housing boom. We saw remodeling spending decline quite significantly in the last downturn.”

The most recent data from the US Department of Agriculture shows that in 2017, nursery, greenhouse items, floriculture, and sod had the highest market value of Rhode Island agricultural products accounting for 47.6 percent of total sales among the state’s 1,043 farms.

Since 1974, the Census of Agriculture has defined a farm as, “any place from which $1,000 or more of agricultural products were produced and sold, or normally would have been sold, during the census year.”

For Bouchard, the sharp demand for sod and unseasonably warm weather through early January allowed him to extend the sod farming season for about two months this year. His business was relatively unaffected by the COVID-19 pandemic because cutting sod is a “one man, one machine” job.

“We are set up in a way that when we cut sod or other stuff, all my guys have a lot of automated equipment,” Bouchard said. “That’s all done with one machine and one operator. We don’t have multiple groups that work together. The delivery drivers could make no contact deliveries.

“We never really slowed down because so many people are home and cooped up,” he added. “They are taking on these projects and doing enhancements. It boosted our industry. It worked in our favor compared to the poor individuals who had restaurants who couldn’t do anything when COVID-19 started.”

Kingston Turf Farms typically provides lawn care services from April to November, but the last couple of years the ground hasn’t frozen until January or February. That allows Bouchard and his employees to continue to work, but at a higher cost for labor.

“This time of year we have been working seven days a week since mid-March,” Bouchard said. “Everybody gets pretty tired and run down this time of year. It’s nice to know when our season comes to an end. Every year it seems to go later, we wouldn’t even think about sod until April.

“Now we go to about Christmas every year.”